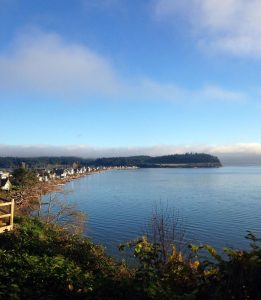 Camano Island did not always bear its intriguing Spanish name. The local Indians called it Kol-lut-chen: “Land jutting out into a bay,” but this name never appeared on a map.

In 1791, Great Britain had sent Captain George Vancouver with the ships Discovery and Chatham to search for a northwest passage to the Atlantic Ocean. He was also ordered to chart Nootka Island and Sound which England got back from Spain through treaty agreements in 1790. Vancouver, with the aid of Peter Puget and Captain Whidbey, spent three summers surveying and naming the west coast areas of North America as far as Cooke Inlet – unaware that the land they saw on the west side of Port Susan Bay was an island, since there was heavy fog while they were charting those waters.

In 1838, Lieutenant Charles Wilkes of the United States Navy was given command of a United States exploration to chart southern waters, including Puget Sound and the Oregon country. This first American scientific expedition was also to name the areas not previously titled. Lieutenant Wilkes’ selection for this small island, nestled between Whidbey Island to the west and the mainland to the east, was Macdonough Island – to honor Master Commandant Thomas Macdonough, captain of the 26-gun ship during the War of 1812. The waters between Macdonough and Whidbey Island Wilkes named Saratoga Passage.

However, in 1847, British navy Captain Kellett of the surveying vessel Herald dropped the name Macdonough for the island in his effort to restore Spanish names to the area. He bestowed the present title of Camano Island to honor Lieutenant Don Jacinto Caamano of the Spanish Navy, who also explored western waters working out of Spain’s naval base in San Blas, Mexico during the 1700’s, but had not come into what was later known as Puget Sound. In the 1855 treaty with local Indians, Governor Isaac Stevens of Washington Territory referred to the island as Perry Island.

Then came the lusty loggers who had a jargon of their own. They jovially “nicknamed” the island “Crow Island”, a name it retained locally through the early 1900’s.

When I ponder this historical tidbit about our lovely island with its musical Spanish name, though settled predominately by Andersons, Petersons, Olsons, and Hansons, I am reminded of Shakespeare’s words, “A rose by any other name would smell as sweet.”